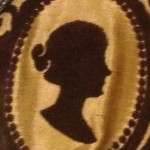 An artist, a lady, a secret passion…

‘When Benedict Cole shuns her request for painting lessons, Lady “Cameo” Catherine Mary St. Clair takes matters into her own hands. She arrives at Benedict’s studio, only to be mistaken for a model! It’s an opportunity she just can’t turn down…

Benedict knows better than to let intimacy interfere with his work, yet he can’t quell his fascination for the mysterious Cameo. And after one daring night together, everything changes. Will Cameo still be his muse when Benedict discovers who she really is?’

The heroine of Enticing Benedict Cole is Cameo. It really is a girl’s name. A cameo is a small carving in relief of a semi-precious stone. The lighter-coloured layer is chipped away to reveal a darker background. In the 19th century, when this story is set, cameo jewellery was popularised by Queen Victoria. At that time small cameo portraits were often painted of well-to-do young women to adorn jewellery, for a keepsake, or to give to a lover. The word cameo has an original Greek meaning of ‘shadow portrait’ – which became part of the story. I collected quite a few cameos while writing the book, as you’ll see on my ‘Cameo Appearance’ Pinterest board. Any excuse will do – right?

Visit Eliza Redgold at Harlequin Mills and Boon for a free extract of Enticing Benedict Cole.